The Long Shop Museum was created in 1984 to restore and preserve the original 18th century site and works of Richard Garrett & Sons, established 1778.

Along with the manufacturing history, we also celebrate the Garrett family including the famous women, such as Elizabeth Garrett Anderson who became the first female doctor in the UK and Millicent Fawcett Garrett, a famous Suffragist. 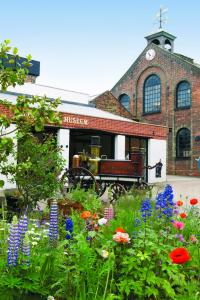